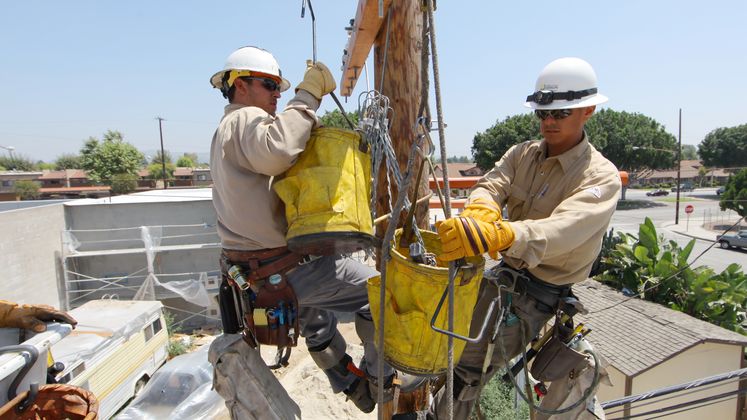 Inspecting more than 1.4 million electric poles is a daunting task, but it’s something Southern California Edison (SCE) is determined to do in an unprecedented pole-loading inspection program.

Starting in 2014, the utility will spend $1.1 billion during the first three years of a seven-year program that will assess poles to meet not only the standards set by the California Public Utilities Commission, but also SCE’s internal, more stringent requirements.

“It is quite an undertaking, but it’s something we need to do to make sure that we are delivering safe and reliable service to our customers,” said Ken Trainor, SCE director of pole assessment and remediation. “We’re going to be inspecting approximately 5,000 poles a week.”

Inspections and assessments will be performed on more than 1.4 million utility poles in SCE’s system over the next seven years, with a goal of replacing 35,000 poles every year through 2022. This is about four times the usual volume of these inspections.

Inspecting, repairing and upgrading every pole in SCE’s service territory is part of the work the utility does routinely. That work will be accelerated in 2014 as part of this major effort.

The new inspection project follows a third-party study on pole loading that found more than 75 percent of the 5,000 power poles inspected in SCE’s service territory either met or exceeded the utility’s standards and exceeded requirements of the state utilities commission.

Most of SCE’s poles were installed just after World War II, a time when safety factors were not separately calculated. Recent advances in technology have also enabled utilities to use more sophisticated inspection and analysis software to calculate the appropriate pole load — a necessity since more equipment than ever is being installed by other telecommunications or cable companies.

“Over the last few decades, more and more devices have been installed on poles with the various advances in technology and the way people now communicate,” said Trainor. “From phone lines to cable TV, to the Internet and wireless service, some of the poles are carrying a heavier load so assessing, planning and fixing poles that do not meet today’s safety standards is important.”

And SCE won’t be alone in this unprecedented pole loading inspection project. One of the reasons that utility poles need to be assessed now more than ever is the increasing amount of equipment that gets installed by other telecommunications or cable companies.

To manage these efforts between the utilities, the Joint Pole Organization has been established to coordinate and regulate among the various companies that install equipment on utility poles.

The collaborative partnership will be even more crucial with the volume of inspections and the potential for many required pole modifications or enhancements by the various partners.

“Over time, every part of SCE’s electric grid infrastructure will need to be replaced,” said Trainor. “Continual inspection and replacement of every grid component is crucial to maintaining a reliable electric distribution system.”