Scholarship is Victorville Student’s Ticket to the Ivy League

Attending an expensive private college seemed out of reach for Chandler Brown until he won a $40,000 Edison Scholars award.

Chandler Brown’s goal is to become an environmental engineer so he can create purification systems for countries with little access to clean water.

The senior at Silverado High School in Victorville had his heart set on attending an Ivy League college or Massachusetts Institute of Technology (MIT), but tuition and room and board seemed too big a financial burden for his parents.

That all changed when Chandler learned he won a $40,000 Edison Scholars award.

“Now that I have this, it’s a gateway to where I want to be,” he said, holding an enlarged copy of the check he received during a surprise presentation at his school’s career center.

Edison International, parent company of Southern California Edison (SCE), selected 30 high school seniors for the 2015 scholarships, which are paid over four years. The $1.2 million scholarship program targets minority, low-income and underrepresented students in Southern California to help them pay for college in the STEM (science, technology, engineering or math) fields.

Chandler’s parents, Yvonne and Tyrone Brown, who were in on the surprise school presentation, were all smiles.

“This is a blessing in disguise,” said Tyrone. “He’s shooting for these goals beyond the stars and we didn’t want to be the ones to turn to him and say, ‘Hey great, but we won’t be able to make it.’”

Silverado High School had a second Edison Scholars winner — Manuel Rodriguez, who received his check at the same time as Chandler.

Manuel said he was “beyond happy” getting the scholarship. His father died of complications from diabetes when Manuel was 14 and money is tight. His mother supports Manuel and his younger brothers on income from Social Security.

“(The scholarship) allows me to attend my dream school of UC Santa Barbara this fall to get my degree in computer science,” he said.

Manuel wants to mentor high school students while he is in college and hopes to create his own scholarship after graduation to help other students who need financial help to attend college.

Another 2015 Edison Scholars winner was Francisco Villegas, a South Gate High School senior who got the news about his scholarship during a surprise visit to his class.

Francisco said winning the scholarship came as a surprise, since he didn’t learn about the program until two weeks before the deadline.

He thought he should apply, noting, “I felt confident, like I was writing my own story.”

In his application, Francisco noted that he struggled in school because English is not his native language.

“This scholarship proves that hard work pays off,” he said.

Francisco has not decided yet where he’ll attend college. His top choices are UCLA, UC Irvine and Cal Poly San Luis Obispo. He thinks he may major in biomedical engineering. 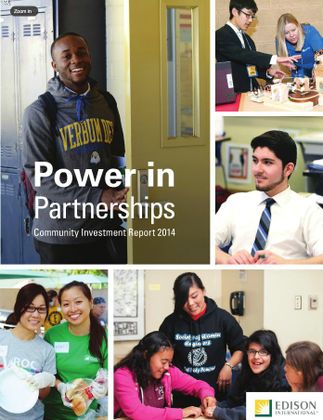